School holidays vary from 6 to 13 weeks

They depend on each country of the European Union

School holidays are periods when schools are closed, except for weekly periods such as weekends. The dates and durations of these periods vary widely across the world. School holidays are much shorter than summer holidays. Its duration varies from one week to two or three weeks, depending on the country. These school breaks influence economic aspects of society because many adults take vacations during these periods to be with their children. This choice leads to an increase in prices in the tourism sector such as transport and hotel prices, as well as a change in road traffic with urban traffic.

Each country around the world has their own school system. For instance, in Argetina students enoying two months off between mid of December in late February. In Australia, the summer holidays last from December to February as well, including the festivities. In Canada the first day of the school break is the last Saturday of June and the last day is Labour Day in September. In China, school holidays are in early July until early September. In India, because different sections of the country experience varied meteorological conditions at the same time, school breaks tend to vary in length.

Summer break lasts around three and a half months in the United States, with pupils concluding the school year between late May and late June and beginning the new year between early August and early September. 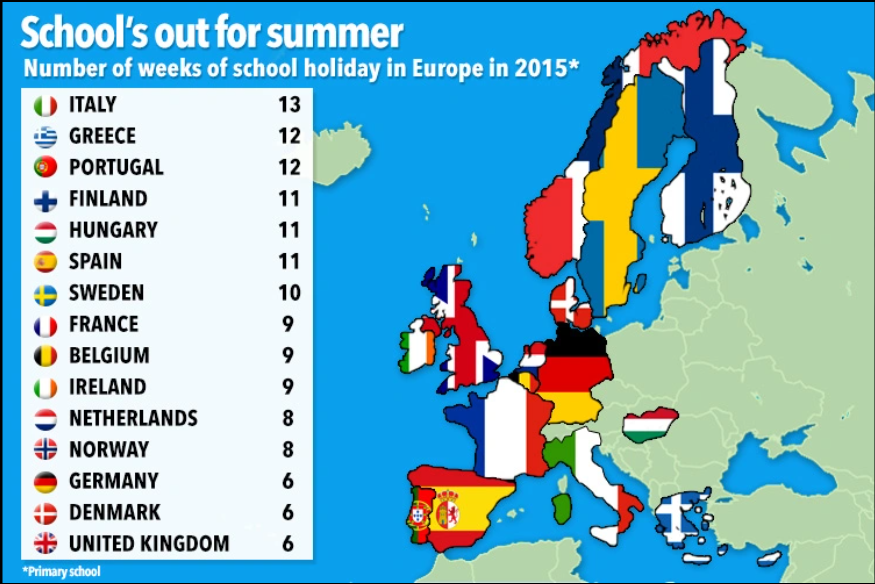 In Europe a map was designed by Jakub Marian, a Czech linguist, to highlight the difference in school holiday duration. The map shows the total length of school holidays by country. In some countries, as Spain, Portugal, Ireland, Italy, Greece, Georgia, Lithuania, Lathivia, Romania and Russia the summer break is normaly three months. In UK, Denmark, The Netherlands, Slovakia, and Germany are two months. School holidays in Switzerland changes by canton. It lasts five weeks in Zürich, for example, and occurs between mid-July and mid-August. It lasts around 10 weeks in Ticino, from late June to early September. The academic year in Spain ends in mid- or late-June and resumes in mid-September. Vacations vary by area, but they frequently include a family vacation to milder climates in northern Spain, or to the Mediterranean beaches in the south or east.

Which country in Europe has the most school holidays?

According to recent European Commission data, primary and secondary school students in southern Europe get a longer summer break.

UK, Denmark and Germany are in the end of the list with only six weeks. Spain, Hungary and Finland are in the middle with eleven weeks. With 13 weeks off, Italian children have the longest summer vacation in Europe, followed by Greece and Portugal with 12 weeks each.